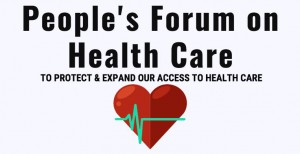 Portland, ME: On the evening of Monday, March 27th, the Southern Maine Workers’ Center along with Maine AllCare and the Maine State Nurses Association will hold a People’s Forum on Health Care, highlighting the voices of Mainers impacted by the health care crisis. The forum will be attended by Maine State legislators, including senator Ben Chipman and representatives Rachel Talbot Ross and Ben Collings.

The Maine Health Care is a Human Right Coalition, led by the Southern Maine Workers’ Center, Maine AllCare and the Maine State Nurses Association, advocates for universal, publicly funded health care. The flawed Affordable Care Act left too many people without access to care, and prioritized insurance company profits. But efforts in Washington to dismantle the Affordable Care Act will leave millions more without access to health insurance.

Peggy Marchand is a member of the Workers’ Center, and will attend the forum. The republican bill will be a disaster. 24 million people will lose health care coverage, particularly rural and elderly people, which will hit Maine hard. This bill amounts to a massive transfer of wealth to the richest people in the world, and it will cause unnecessary death and hardship.

In Augusta, the Governor has proposed a state budget that will eliminate 20,000 additional people from MaineCare. These attacks on our access to health care are unacceptable. People in Maine want more health care, not less.

The People’s Forum on Health Care will feature testimony from individuals directly impacted by the health care crisis, and highlight the solution of universal, publicly funded care. Samaa Abdurraqib, a member of the Workers’ Center explains, when we spotlight stories of our experiences with the US healthcare system, we learn the truth about how the healthcare actually works in this state and in this country. These individual stories tell us the big story of healthcare delivery in the US, the flaws, the gaps, and the inadequacies.

Ronald Flannery is an organizer for the Health Care is a Human Right campaign. For the last four years, we’ve been talking to people all across the state, and 94% of the people we surveyed believe healthcare is a human right. 80% percent support the idea of a universal, publicly funded health care system. It’s time politicians fight for what the people want.

The Southern Maine Workers’ Center will release a report later this spring detailing their survey findings, and outlining a path towards universal health care in Maine.