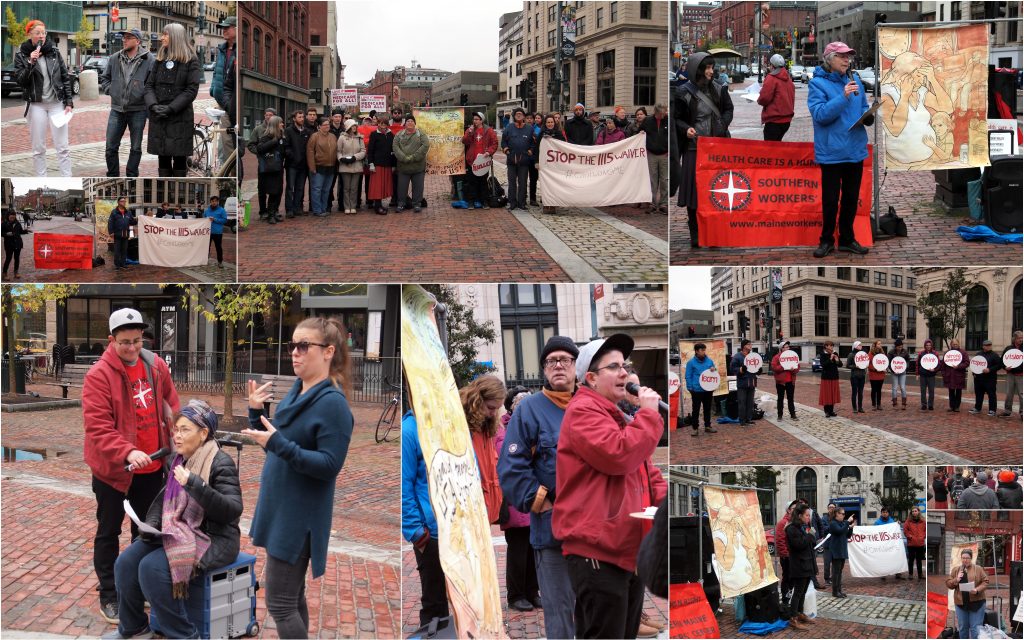 In October we launched our campaign against the 1115 MaineCare waiver, because these attacks on MaineCare will move us further away from our vision of a universal, publicly funded health care system. Yesterday, the federal Centers for Medicare and Medicaid Services (CMS) approved Maine’s 1115 waiver application, paving the way for thousands of Mainers to lose their health care coverage. Just as we are finally poised to win MaineCare expansion, the LePage-appointed DHHS administration continues advancing its agenda to dismantle MaineCare. We are committed to stoping the implementation of the waiver, and to building a powerful movement to win a health care system based on our human rights, not corporate profits. Read our press release about the approval below.

Portland, ME: The Southern Maine Workers’ Center and coalition partners are committed to stopping implementation of Maine’s 1115 Demonstration Waiver, approved Friday, December 21st by the Centers for Medicare and Medicaid Services (CMS). If implemented, the 1115 Waiver will fundamentally restructure MaineCare, stripping many people of their access to care by creating deadly bureaucratic and financial barriers. In Arkansas where similar measures have been implemented, thousands of Medicaid recipients have lost coverage.

On October 28, The Southern Maine Workers’ Center launched a campaign against the waiver, and has been organizing Mainers who would be impacted by the changes.

Mark James is a member of the Southern Maine Workers’ Center, and a MaineCare recipient. James said at the campaign-launch, “I wasn’t working when I was diagnosed with Non-Hodgkin Lymphoma the first time. I knew if I hadn’t had MaineCare I probably would have died. I was living in Aroostook county, in rural northern Maine, where there are not a lot of jobs. They say this is to incentivize work. I say these requirements are set up to kick working poor people off of MaineCare.”

DHHS misleadingly portrays the 1115 waiver as a way to incentivize work in order to distract from its aims to cut access to healthcare, stigmatize low-income people, undercut both MaineCare and the Affordable Care Act, and transfer resources from poor people to corporations and the wealthy. In addition to punitive work requirements, the changes would include new cost burdens, premiums, penalties and fees, asset tests, fines for missed appointments, and burdensome, expensive paperwork.
For more information about the campaign against the waiver, contact Workers’ Center member Meaghan LaSala: 973-862-7105, meaghan.lasala@gmail.com.
###