We Did It! After a year long campaign, Portland will raise the minimum wage to $10.10 in January! 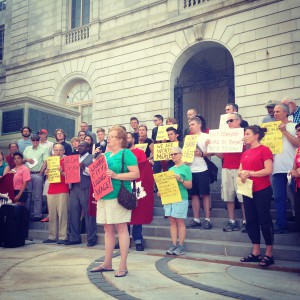 Throughout this past year, the Southern Maine Workers’ Center has been at the center of an organizing effort for a universal, enforceable, living wage in Portland. SMWC members worked in partnership with low-wage workers, faith leaders and organizations representing women, people of color and trans and queer young workers to advocate for meaningful change. Members met with city councilors, testified at hearings, and surveyed low-wage workers about their experiences with wages in Portland, with the aim of a winning a wage that moved the city in the direction of a living wage. Yesterday we held a press conference on the steps of City Hall yesterday leading up to the hearing and vote, at which more than 40 people came out to tell stories, shout chants, and make their voices heard.
SMWC is grateful to have worked with incredible partners in this campaign and at yesterday’s press conference including: Maine Women’s Lobby, Portland Racial Justice Congress, Portland Outright, Maine Equal Justice Partners, Maine AFl-CIO, Southern Maine Labor Council, Interfaith Worker Justice Southern Maine, among others.
City Council Listened!
The Southern Maine Workers’ Center commends the City Council for having heard the people’s loud, clear call for an increase in the city’s minimum wage. In particular, the Southern Maine Workers’ Center applauds Councilors Hinck, Marshall, Costa, Donahue, Duson and Mayor Brennan for voting in favor of the new minimum wage which, thanks to last night’s City Council vote, will be $10.10 per hour on January 1, 2016, increasing to $10.68 per hour on January 1 ,2017, and indexed to inflation after that

It is a meaningful step towards greater justice in our city, and because the wage is tied to inflation, its value will not erode in just a few years time. 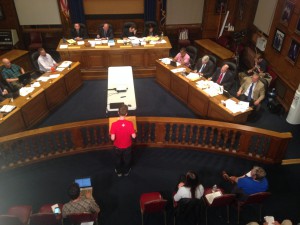 While $10.10 is not the living wage we know is necessary to truly meet the needs of Portland’s workers, it is an important step in the right direction. Portland’s voters will have a chance in
make more increases in November as Portlanders for a Living Wage has secured enough signatures to place a $15 minimum wage question will be on the ballot

The version of the ordinance that passed -championed by Councilor Hinck – was a dramatic improvement upon the Finance Committee’s recommendation, which had not only proposed a lower minimum wage that increased more slowly, but also failed to index to inflation. That would have meant any modest improvements to low-income wage earners’ pay would have

eroded over time as the cost of living increased

There is still much work to do in building a community in which all people can thrive. To start, this new law must be vigorously enforced to have a real impact. The city must dedicate time and resources to enforcement, exploring the possibility of hiring an enforcement officer, and enlisting enforcement help from community organizations with close ties to communities of vulnerable workers.

Secondly, the impact of this new law on tipped workers is still unclear, but Southern Maine Workers’ Center hopes that tipped workers – as a large percentage of low-wage workers in Portland – will see an increase in their base hourly wage due to this new law. 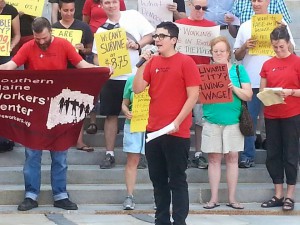 While we are proud of our city, we know raising our minimum wage should be the
beginning, and not the end, of a program to keep Portland accessible to working people. This victory is the result of workers and community groups organizing for the needs of our communities, and that’s work we’re going to keep doing, until we have a economy that works for everyone.”