Now that Governor Mills has signed LD 369 into law, Maine will become the 12th state in the country to enact a version of a paid sick time policy, and the first state to pass a general paid time off policy. LD 369 is an important step forward for the workers in Maine who have never been guaranteed any paid time off, and that is something to celebrate. We are proud of the role members of the Southern Maine Workers’ Center and the Maine Women’s Lobby have played for years to elevate the need for paid time off, and to engage workers in fighting for it. We will continue that work until every working person in Maine is covered.

The Southern Maine Workers’ Center and the Maine Women’s Lobby partnered on the issue of earned paid sick time since 2016 and with, the Southern Maine Democratic Socialist of America, built the Keep Workers’ Healthy Coalition that fought a multi-year campaign for an earned paid sick days ordinance in Portland. This bill would have ensured workers in every Portland business could earn up to 5 paid sick days a year.

In rallies, hearings, and on social media, workers bravely stood up for the right to earned paid sick days. Many shared personal stories ranging from sending children to school sick, to experiencing domestic assault, to getting violently ill while working and not being allowed to leave. They spoke on the record to ensure that they, and others, could have the right to heal that so many professionals take for granted. The language of the policy was informed by the lived experience of workers involved in the campaign and the experiences of states and municipalities who had already enacted laws. Our campaign framed paid sick days as a race and gender equity issue, and highlighted the experiences of marginalized workers, including LGBTQ+ families and immigrant communities. We made a compelling case that policy should be universal and cover all workers including part-time, seasonal, and per diem, and include businesses of all sizes.

LD 369 is an important step, and we are grateful in particular, to the leadership of Sen. Rebecca Millet for bringing forward the original legislation. However, work still needs to be done. As amended, the bill excludes people who work at businesses with less than ten employees, seasonal workers, some per diems, state and municipal workers, and others. It has a low accrual rate, making it difficult for part-time workers to use. It includes a preemption clause, which, as intended, undermined the Portland ordinance, and prevents any municipality from passing a more inclusive ordinance in the future. Because of this, some of the very workers who started the push for earned paid sick days in Maine will not be covered by the state law.

We are particularly concerned about the need to ensure protections for workers who attempt to use PTO, including protection from retaliation. The bill contains no definition of what constitutes the emergency use of PTO and places that determination in the hands of managers, leaving workers vulnerable to retaliation.

We will continue to organize to ensure that the rules for how LD 369 is implemented address these needs. Our members will bring their first-hand knowledge to these policy conversations to make sure that workers will actually be able to use the time off they earn for the things they most need it for. When LD 369 goes into effect in 2021, we will educate workers about their rights, and advocate for the workers whose rights are violated. The laws protecting workers are not given, they are fought for, and we will continue that fight. 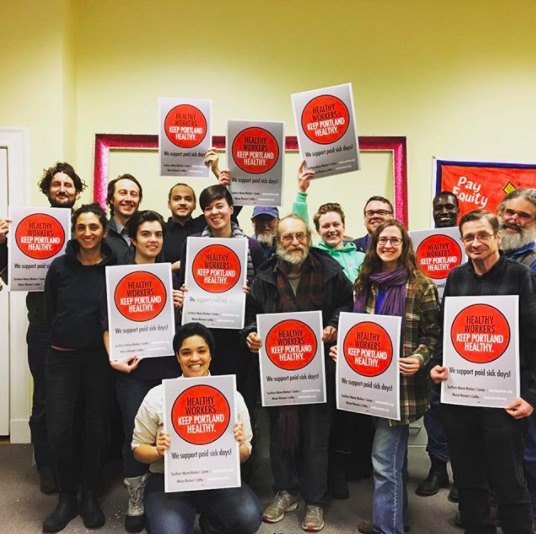