NAACP Portland and the Southern Maine Workers’ Center have released a statement of solidarity with a nationwide week of action for human rights, part of the Forward Together Moral Movement lead by the North Carolina NAACP. While our organizing is focused on making change on the local and state level, we believe that it is critical to support organizations and movements nationally who are also using human rights to advance racial and economic justice in their communities.

From August 22nd to August 28th , the Moral Week of Actions uniting people across a broad range of issues related to human rights and justice. Reverend William Barber, president of the North Carolina NAACP described the need for a broad movement of state-based actions to address people’s fundamental human rights. Martin Luther King Jr. said go back home and build state-based movements, Reverend Barber said. “People who are really about justice can find a way to work together.” The actions taking place today are focused on the expansion of Medicaid in the need for all of our states to recognize the human right to health care. 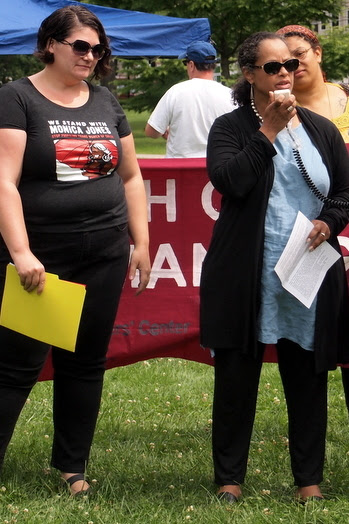 At the Southern Maine Workers’ Center, we’re building a worker-led movement for universal health care, said Elizabeth Capone-Henriquez, a member of the Southern Maine Workers’ Center. ‘But we also understand that all of our issues are connected. Health Care is something everyone should have access to, like housing, education, a healthy environment, a living wage, and equal protection under the law. We’re stronger when we work together to ensure our human rights.

The ACLU of Maine, the Maine AFL-CIO, Maine AllCare, Maine Equal Justice Partners, the Community Union of Ellsworth and Hancock County, the Maine People’s Alliance, Portland Outright, and the Southern Maine Labor Council also signed the letter of support. Rachel Talbot Ross, President of the Portland Chapter of the NAACP, read this letter aloud at our Health Care is a Human Right Free Clinic and Community Celebration on August 16th

The NAACP of Maine and the Southern Maine Workers Center, along with the below signed groups, publicly recognize and affirm that:

-From Maine to Mississippi, in all parts of the United States, and especially in those states where people suffer because politicians choose to deny and limit peoples’ access to health care, basic services, and public goods, we shout out from our corner of this country a call of solidarity with the coordinated actions being carried out August 22-28, 2014 at state capitols and governor’s mansions in support of our basic human rights.

-We act in solidarity with the people of all our sister states where, like here at home in Maine, state government has failed to expand Medicaid, which would provide health care to poor and working people who do not qualify for insurance under the Affordable Care Act. We believe in the human right to health care for all people and express our support for the August 27, 2014 Day of Health Care Action.

-We are humbled by the prophetic leadership of the Forward Together Moral Movement in North Carolina, including their ability to bring together people from all walks of life, types of groups and organizations, and political parties, to demand justice and an end to the needless suffering of everyday people.

-By signing this statement, we acknowledge that we, too, are a moral movement”a fusion of groups with the common goal of defending the dignity and rights of all people in Maine. We take this first step of signing this letter as a simple coordinated action among us here in Maine, and in solidarity with those other states, to send a clear message to friends and foes alike: divided we fall no more; we are stronger together!

Chair, Board of Directors, SMWC