What Catholics Believe: The Seventh Commandment, Part 2
Do Not Steal; Treat Workers Justly

Reprinted from The Harvest: The Magazine of the Catholic Diocese of Portland
January/February 2016, p.10

If we were to see a story on workplace theft, we might imagine an armed robbery with masked intruders emptying the cash registers and ordering employees and customers to deliver over their valuables. However, for many low-wage or part-time employees, wage theft is a constant reality. But the culprit more often than not is their boss, not outside intruders.

An article published by journalist Seth Freed Wessler in 2013 states, The U.S. Department of Labor found a couple years ago that 40 percent of fast food outposts in the country fail to consistently pay their employees a minimum wage or overtime. And a recent study from New York City found that 84 percent of fast food workers complained that their employers regularly force them to work off the books, work overtime without overtime pay or pony up for their own gas for deliveries. 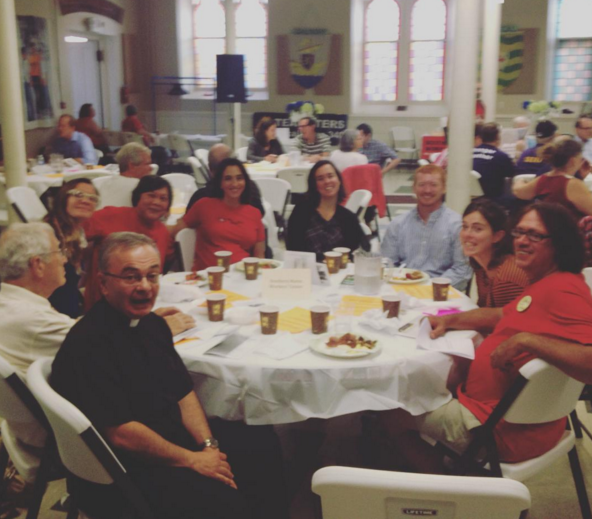 Father Michael J. Seavey with members of the SMWC at the annual Labor Day Breakfast in Portland, ME

The Catholic Church envisions the workplace as an opportunity for human flourishing. A Catholic spirituality of work teaches us that our daily labors are opportunities to develop every aspect of our humanity. A human workplace requires the principles of justice, respect and responsibility flow in all directions: from employers to employees and vice versa. In addition, employees need to treat one another with justice and respect as well.

The Old Testament prophets raged against exploitation of the poor and vulnerable. Within their cries, defrauding workers appeared on their radar screens. Among them, the prophet Jeremiah proclaims, Woe to him who builds his house on wrong, his terraces on injustice; who works his neighbor without pay and gives him no wages (22:13).

In The New Testament, Jesus’ Parable of the Vineyard Workers (Matthew 20:1-16) highlights the landowner’s determination to pay all workers the usual daily wage regardless of how many hours they worked. While the parable is a teaching on God’s mercy essential for salvation, the workers are dependent on the daily wage as the minimal amount needed to care for their families basic needs.

The Letter of James makes this point dramatically, Behold, the wages you withheld from the workers who harvested your fields are crying aloud, and the cries of your harvesters have reached the ears of the Lord of hosts (5:4).

Violations of justice result in theft of one’s material possessions or one’s sense of dignity and well-being. While this article focuses on wage theft, other injustices rob the workplace of an environment needed to promote human flourishing. Employers and managers have an obligation to provide a workplace that is as safe as possible and free of undignified behavior. Sexual harassment, ridicule, or discrimination rob people of their dignity. False accusations rob people of their reputations and their inner peace. Everyone in the workplace has a right to their good reputation and a right to work in a safe and respectful environment.

In addition to wage theft, some employers take advantage of the independent contractor phase of business. This is especially true in construction and building trades. Often legitimately, contractors will sub-contract with plumbers, electricians, finished carpenters and others for a project. These sub-contractors are paid a lump sum for their work and then pay their own workers wages and benefits from that sum of money.

However, some companies will classify many of their own employees as independent contractors. Each is then paid a lump sum and from that each provides for their family, but also pay all other taxes and expenses normally paid for by their employer. The result is a inadequate income robbing them of just pay for their labor. These practices violate many state and federal labor laws. Many workers, unaware these practices are illegal or pressured into silence, often leave these practices unreported.

This particular practice not only robs employees of just wages, but creates unfair competition as well. For certain, vast numbers of honorable employers provide just wages and benefits to their workers. Other contractors exploiting their workers can offer cheaper prices for their work. In the long run, the entire community suffers from these unjust practices.

The Compendium of The Social Doctrine of the Church discusses these issues within its body of teachings, Remuneration is the most important means for achieving justice in work relationships. The just wage is the legitimate fruit of work. They commit grave injustice who refuse to pay a just wage or who do not give it in due time and in proportion to the work done ¦Remuneration for labour is to be such that (workers) may be furnished the means to cultivate worthily (their) own material, social, cultural, and spiritual life and that of dependents¦ The simple agreement between employee and employer with regard to the amount of pay to be received is not sufficient for the agreed-upon salary to qualify as a ˜just wage’, because a just wage must not be below the level of subsistence of the worker. #302

Father Michael J. Seavey is the pastor/administrator of the Portland Peninsula and Island Parishes, as well as a dear friend of the Southern Maine Workers’ Center and a founding member of Interfaith Worker Justice -Southern Maine.