From Portland to Paris: It Takes Roots to Weather the Storm

A report from SMWC’s Meaghan LaSala

from the COP 21 in Paris, France

At the Southern Maine Workers’ Center, we use a framework of human rights to help us envision the world we are building toward. We are organizing a broad based movement for the rights of poor and working class people in Maine, like the human rights to health care and to work with dignity. Recently we joined the Grassroots Global Justice Alliance (GGJ), an alliance of organizations like ours from all across the United States. We joined with the intention of strengthening our connection to national and international people’s movements united against poverty, pollution, patriarchy and war– because we know that our local struggles are connected. 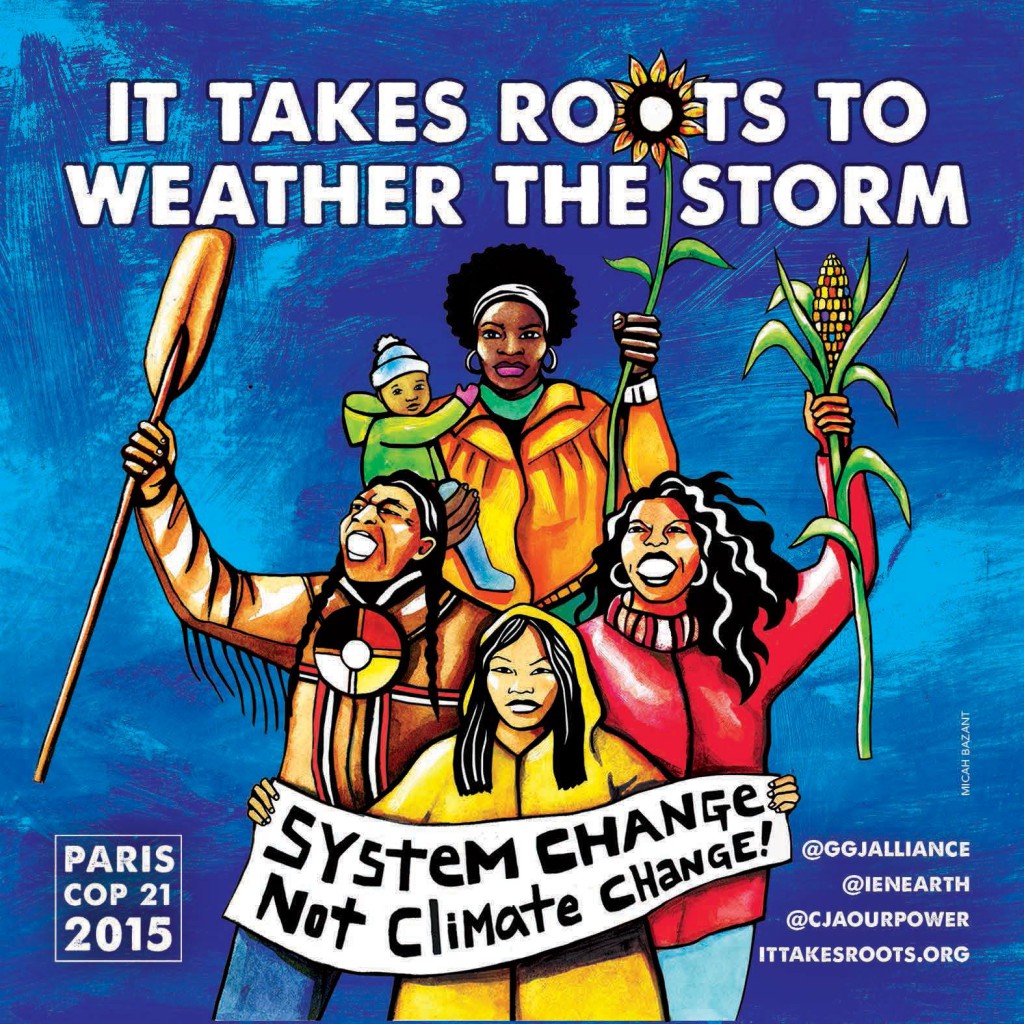 I was particularly excited to join GGJ, because one of their focuses is building a U.S. movement for climate justice. Outside of the Workers’ Center, I’ve been active in trying to stop corporations like Irving from using trains to carry fracked oil through our communities, as well as other local struggles for climate and environmental justice. As an organization that prioritizes racial and economic justice, I think the Southern Maine Workers’ Center is in a strong position to take leadership in Maine on climate issues– by bringing poor and working class people together to identify the ways that climate change is impacting us. I believe that joining GGJ will help us take this step towards climate justice leadership.

This week I am in Paris with GGJ as part of the It Takes Roots delegation of over 100 frontline community leaders. Although we are in Paris in part to call out the COP 21 as an inherently flawed process that prioritizes profit over people and planet, the deeper reason we are here is to show the world that real solutions to climate change do exist, and they are coming  from the indigenous peoples, the communities of color and the working class folks who are living and organizing at the front lines of the climate crisis.

What I am seeing in Paris gives me deep hope for the future– and I’m not talking about the COP talks. I’m talking about moments like the Just Transition Assembly, where I heard from leaders like Jose T. Bravo of the Just Transition Alliance telling the story of environmental justice groups and labor unions uniting under a vision of a truly sustainable future based in workers rights and community rights. I’m talking about Jihan Gearon of the Black Mesa Water Coalition talking about their vision of kicking the exploitative coal industry out of their homeland and transitioning to solar energy projects that would be controlled by and benefit the Navajo people. I’m talking about a whole thriving ecology of people’s movements that are rising up and bringing forth the solutions we need to keep our planet alive.

I call on my people from Maine to join me in growing the climate justice movement at home. Get active in your community. You can join the Southern Maine Workers’ Center. We are a membership-based organization, which means every voice counts and is needed to make our movement strong. Don’t look to international agreements like the COP 21 to make the changes we need. Corporations and the governments of developed countries are trying to remove human rights and indigenous peoples’ rights from the agreement. They are privatizing the atmosphere, and coming up with schemes to make money off of this crisis. We need to join in solidarity with Wabanaki people and the Penobscot Nation in their struggle to maintain their sovereignty and their inherent right to sustenance fishing in the Penobscot River. Their struggle is an example of how indigenous peoples’ rights are a threat to those who seek to privatize and exploit every corner of the earth. Together, we can stop them. Let’s build a movement so strong, loving and beautiful that nothing can stop us from making a just transition to a future free of racism, poverty and fossil fuels.