While travelling from the RNC to the DNC on the #peoplescaravan I’ve had the chance to mingle with some of the most determined and empowered activists in the country. The directors of Grassroots Global Justice have assembled a strong coalition composed of diverse groups such as Iraq Veterans Against the War, the Vermont Worker ’s Center, the west coast 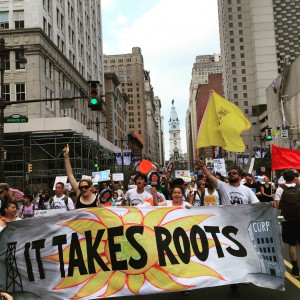 based Communities for a Better Environment, and the Honduran resistance group COPINH. We are united under the slogan It Takes Roots to Change the System. While the activists who embody and enliven our caravan inspire me to no end, many of the most poignant conversations I’ve had have been with outsiders and onlookers. They see our bus, our T-Shirts, our signs and our actions and want to know what we mean by roots and change.

It’s meant to look like an impossible task. At a pit stop in Pittsburg, I shared a beer with a man named Josh from Jacksonville who told me about his workplace. In his world, racist ideas concerning immigrants link well with misogyny, poor bashing, Islamophobia, and xenophobia. Josh ’s greatest phobia is the fear of losing his job. At the meat-cutting factory he works in, the word union is equivalent to a curse word. While he laments recent pay cuts and the never-ending attack on his benefits, he feels powerless to do anything about it. After all, he shared, he has an obligation to provide for his wife and child, an imperative which understandably outshines all other responsibilities. 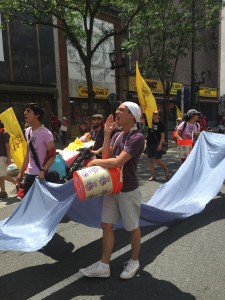 utside our hotel, I shared a cigarette with an ex-marine whose vibrant tattoos stretched all the way up and down both arms. He warmed up to me when he learned that we were protesting the government. I asked him if he wanted me to shout anything on his behalf during our upcoming actions at the DNC. He told me that he was   tired of liberals who know nothing about guns trying to tell me what to with my rifles.  Digging a bit further, I learned that he and his family live off the land in Pennsylvania- alone and isolated in the middle of fifty acres of pine trees. The government, he said, has forbidden him from collecting rainwater, has made it difficult for him to collect solar power, controls strictly the hunting and fishing which permits him to feed his family. Little did he know that inside the hotel were the delegates from COPINH, who are fighting and dying to stop the construction of a government-backed hydroelectric dam that threatens to destroy their connection to the land and their traditional way of life. Oftentimes it ’s hard to appreciate the commonalities embedded in our anger.

Grassroots Global Justice is a coalition of more than sixty organizations, each narrowly focused on the issues that affect their own communities. While our work back home varies significantly in scope and form, we come together to bear witness to the fact that all of our fights are, in fact, intimately linked. Sharing our stories has taught us that the same forces which oppress immigrants are the same forces which oppress people of color born in the United States, which oppress working class whites, which oppress indigenous groups in the global south. We are divided through hate speech, through labor market competition, and through arbitrary borders. These barriers were erected with the express goal of making the necessary seem impossible. 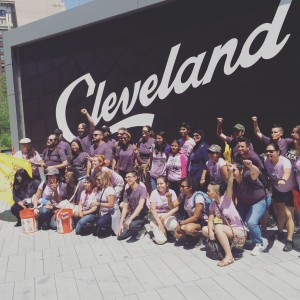 Earlier today, the People’s Caravan stopped in Baltimore to visit the community where Freddie Gray was murdered by the police. We visited with leaders from local groups like the Friend of a Friend Coalition, whose work includes reclaiming abandoned buildings such as the Tubman House: where young children go to receive tutoring, where teens maintain a community garden, and where formerly incarcerated adults go to receive the support required to transition back to a normal life. It is a sacred place, a site that produces hope and inspiration for everyone in the community. While all of us on the caravan were foreign to this neighborhood, we were all welcomed with great hospitality and love. With  chants, hugs, and tears, we built solidarity and assured them that we would carry their struggle with us  “ not just to Philadelphia but back home to our own communities as well.

The lesson that was reinforced in me today is one that has been taught and retaught for millennia. That it takes roots to weather the storm of hatred and division; that it takes roots to build a just community, city, country, and world. There is no doubting that the interests of the powerful who govern our world differ greatly from the interest of common people. There is no doubting that individually we are powerless to change the systems which repress us.  What we aim to show with our caravan is that there is also no doubting that together in solidarity we generate a different kind of power, a kind built on love and unity – a kind that cannot be divided. A kind of power capable of changing the system.