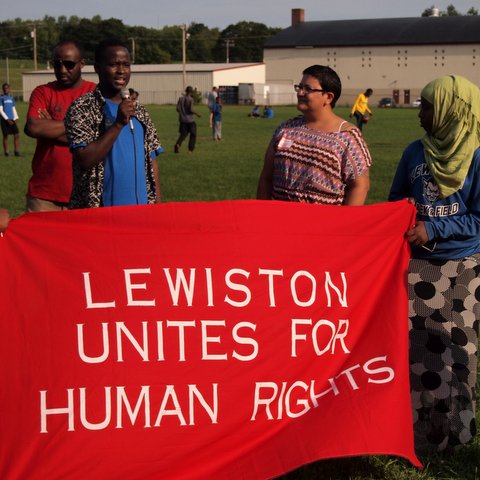 What a week y’all just had! The Good Food Bus got rolling, bringing much needed fresh, local, and affordable foods to people of Lewiston, Auburn, and Bath. The Tree Street Youth Center began its first week of enrichment classes. The 21st Century Lewiston High School leadership program is now 50 students strong; in October, these changemakers will begin a service project with younger students at Longley Elementary. There’s so much activity, love, and investment in young people and the future beaming out from the center of your city to its edges! It’s truly an inspiration to us at the Southern Maine Workers’ Center, because we believe that digging deep in our communities is the surest way to transformation and justice.

Unfortunately, these aren’t the reasons Lewiston has been receiving regional and national media attention. Attacks on poor folks are nothing new, but attempts to make arbitrary divisions between ‘law-abiding citizens’ and ‘welfare recipients’ who are ‘on the dole’ still hurt. Characterizations of people accessing public assistance as criminals and victims not only misrepresent and mystify the inequalities that lead to poverty–they tell a dangerous lie: that needing and asking for help is a weakness.

SMWC fights for human rights. We believe in everyone’s rights to quality healthcare, critical and comprehensive public education, safe and accessible housing, and work with dignity that pays a living wage. We believe it is our responsibility to join with our neighbors and fight for systemic changes, as well as to work collectively to meet immediate needs. Public assistance programs are important because they allow people to survive. Organizing for policies grounded in an understanding of human rights causes us to thrive.

The people of Lewiston are already doing both, and we are proud to belong to the same statewide community as those fighting for housing justice, immigrant rights, youth empowerment, and food security. As a movement-building organization committed to fighting for economic justice and comprised of people from ‘ many class backgrounds, members of the Southern Maine Workers’ Center are in solidarity with poor and working class people everywhere. We are deeply moved by the organizers, advocates, farmers, students, teachers, clinic workers, and neighbors who work tirelessly to make Lewiston a loving city for ALL of its residents. We are in this together.

In Solidarity & With Love,